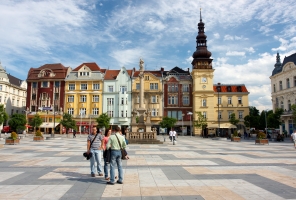 Moravian Ostrava is a real city centre. Although it is not extensive, you will find here museums, galleries, theaters, clubs, many shops and restaurants, all set against the backdrop of architecture from the turn of the 19th and 20th centuries.

• Prokeš Square with the Observation Tower of the New City Hall (the tallest city hall tower and the largest city hall complex in the country)
• the house by the Ostrava architect Felix Neumann
• former grammar school (today Faculty of Education, University of Ostrava)
• Husův sad Park and villas in Husův sad (villa by Paul Hawlik in English style and villa by Dr. Julius Eisner, the first Art Nouveau villa in Ostrava)
• Poštovní Street (one of the oldest streets in the city with Art Nouveau houses)
• Cathedral of the Divine Saviour (the second largest church in Moravia)
• Faculty of Arts, University of Ostrava (former famous café and Hotel Garni)
• Jirásek Square (known among the inhabitants of Ostrava as Kuří rynek, a square with houses from the turn of the 19th and 20th centuries)
• Masaryk Square (central square with the oldest houses and the old town hall from the 16th century, the oldest pharmacy in Moravian Ostrava, the house on the square where General Laudon and Emperor Joseph II slept)
• Church of St. Wenceslas and Kostelní Square (the oldest church in Ostrava from the 13th century, the Ostrava-Opava diocese, the remains of the city walls)
• Miloš Sýkora Bridge - tank No. 051 (tank of the Czechoslovak Brigade, which participated in the liberation of Ostrava in 1945)
• Silesian-Ostrava City Hall (building from 1913, TGM's daughter Alice Masaryková spent the night here)
• 28. října Street (former Říšská Street, the main connection from Opava to Těšín)
• Hotel Imperial (the place where the mill originally stood and the ditch led here)
• Antonín Dvořák Theater (theater from 1907, originally a German stage)
• Černá louka (Black Meadow, former Tivoli amusement park, today exhibition centre)