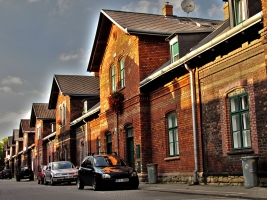 Ostrava is full of contrasts - in addition to neat neighbourhoods with villas and parks, and in the vicinity of wide magnificent boulevards, industrial districts crouch, hiding old workers' colonies and neglected architectural gems. A milestone in the history of Vítkovice was the year 1828, when it was decided to build a metallurgical plant here. Shortly after the establishment of the plant, the appearance of the town changed radically. Workers' colonies and office buildings, factory hospitals, schools, nurseries and kindergartens, markets, a town hall and a church were built. A characteristic feature of all buildings is the brick unplastered masonry.

• town hall (neo-Gothic building by the Viennese architect Max von Ferstel from 1902)
• factory hotel and gym (hotel designed by Hans Ulrich, former mayor of Moravian Ostrava, has long been a centre of culture)
• Municipal boys' school (architect Hans Ulrich, the first school for employees' children was built by the owner of the ironworks Salomon Mayer Rothschild as early as 1843, the school stood on the premises of the ironworks)
• hospital (the first factory hospital on the European continent)
• Church of St. Paul (neo-Gothic building designed by August Kirstein)

• U Haus (on both sides of the church there are two U-shaped houses called U Hauses, these multifunctional houses are an example of living in Vítkovice), a factory nursery (the care of preschool children was the part of the social program of the Vítkovice ironworks)
• Primary and secondary girls' school (the monumental building designed by Ludvík Fiala is rich in Art Nouveau elements on the facade)
• Český dům (Czech House, centre of Czech social life)

• Workers' colonies (workers' colonies, which were used to accommodate factory employees, are the phenomenon of Vítkovice)
• chateau (the oldest preserved building in Vítkovice, an Empire chateau with a classicist facade built by the Rothschilds in 1846-47, served the owners of ironworks, mainly its directors lived in it)
• Dolní oblast Vítkovice (Lower Vítkovice area) - for those interested