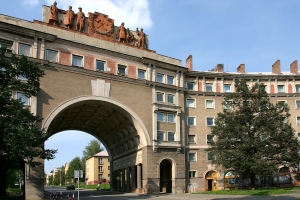 In 1948, it was decided that the "old" Ostrava (today's Moravian Ostrava) would be demolished and a new Ostrava would be built. To the west of the Ostrava agglomeration, a large housing estate for one hundred and fifty thousand people was to be built. Today, the city district has just under 70,000 inhabitants, and on 1st September 2003, part of Poruba became a city monument zone.

• the first Poruba construction district, the tour starts at the beginning of Hlavní třída Boulevard
• corner houses by architect Boris Jelčaninov (you would not believe that the houses were built in the 1950s and not in the period of Classicism or the Renaissance)
• Hlavní třída (Main Boulevard, former Lenin's Boulevard, view of the VŠB-Technical University - its history)
• Věžičky (Towers, a set of houses that are remarkable for sgraffito decoration and Renaissance gables, sgraffiti idealize the life in Ostrava at the beginning of the building of the communist Czechoslovakia)
• Oblouk (Arch, architect Evžen Šteflíček, inspired by St. Petersburg's Palace Square)
• Church of St. Mikuláš (church from the 15th century got its present appearance in the years 1788-1793)