The Comenius park in the hearth of Ostrava is one of the largest urban parks in the Czech Republic. More than 3000 trees are in a total area of 30 hectares.

The park is a centre for cyclists, in-line skaters, runners and walkers. Children and parents can use the indoor and outdoor children's playground.

HISTORY
The park began to emerge in a natural way more than one hundred years ago. The meadows next to the river, which narrowed its previously meandering riverbed after the floods in 1880, were a place for family picnics on the weekends. A lot of people also visited the shooting range located in an area of today’s Town hall. This part of the bank was officially called a park since 1894.

It was in the year 1907 when the municipal building office issued a generous urbanistic-architectural concept of the area, mainly associated with the name Ignaz Faigl. This concept focused mainly on the recreational functions of the area, it mentioned areas for sport and entertainment and connected the park with the river. There were, for example, three resting spots with pergolas between the park and the river. Noteworthy was the design of the observation deck in the bend of the river, from which the spectator standing in the pavilion or sitting on a bench in the shade of creeping plants could look at the river and see the whole stream with the panorama of Beskydy mountains in the distance.

The park was named after Jan Amos Komensky in 1919. In the spring of 1926, the city issued a public competition to connect the surrounding networks of street with the park to create an organic part of the city. A proposal was chosen, which was based on modern trends of garden art with a regular arrangement operating with rather different colours.

The first Czech tennis club was founded here in 1924. Ivan Lendl, the winner of David Cup, U.S. open and French open spent his youth here.  Lendl is native from Ostrava and lived near the Comenius park.

Further development of the area was influenced mainly by the giant complex of the New Town Hall (1924 – 1930). The park was finished in the second half of the 30s according to the design by Prof. Ing. Arch. Jaromír Moučka. In 1992, a study of orchards and embankments was prepared by Ing. Lubomír Rychtár, which was partially implemented. Some undulations in the northern part of the park were created according to his proposal. 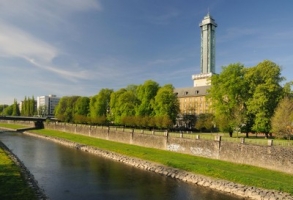 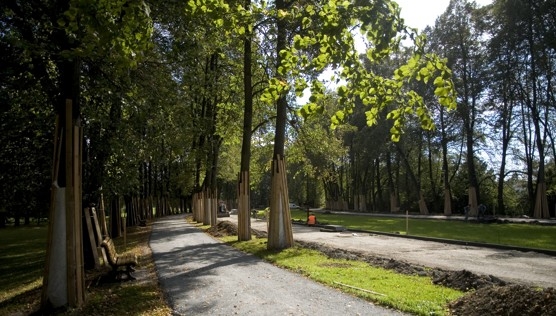 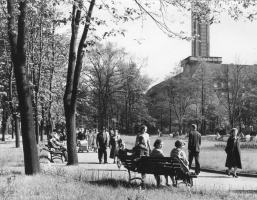