Ostrava is full of impressive murals and well-done graffiti. Discover the most interesting of them!

In recent years, several impressive murals and a lot of successful graffiti have been created in Ostrava. The walking route will take you through Ostrava as an open-air gallery.

The walk begins in the Černá louka area, where one of the walls of Pavilion C is decorated with the first Ostrava mural depicting the girl Taylor (2014) by the American artist Nils Westergard, who started with graffiti at the age of 14 and now mainly uses the stencil technique. Set out along Pivovarská Street past the Puppet Theater (a fairy-tale puppet show takes place at the local astronomical clock every even hour) and walk along Vojanova Street to the pedestrian zone on 28. října Street. Here you will have a view of another of Westergard's work - an impressive portrait of the girl Meredith from 2016, who is also called Madonna Ostravica after the abandoned department store, wall of which it decorates.

Walk through the park past the department store Ostravica, cross Nádražní Street and continue to the end of Denisova Street. The blind wall of the Transport Company's headquarters is decorated with an abstract mural of the graduate Martin "Sabon" Sněhota, who graduated from the Faculty of Fine Arts and Music of the University of Ostrava in the studio of Jiří Surůvka. Nikola "KHOMA" Vavrous took care of the implementation itself. Walk around the House of Arts (art lovers will definitely stop there for a tour) and the OSTRAVAINFO!!! infocentre on Nádražní Street, where on the right side you will pass the so-called Piazzetta, on which statues of students of the already mentioned Faculty of Fine Arts and Music are exhibited. After about 350 m, an impressive mural called "Jump" by Polish street artist Mariusz "M-City" Waras from 2020 will appear in front of you in a gap on the left side of the street. The painting is inspired also by the legend of the origin of the emblem of Ostrava City.

Go back a few tens of meters and set out along the famous Stodolní Street to its end behind the underpass under the railway line. Cross and continue along the busy Místecká Street to the intricate system of underpasses under the Náměstí republiky square. The otherwise unattractive underground spaces under the public transport interchange were decorated in 2013. In a short section near the Tieto Tower building, you will find four interactive metal panels with the drawings by Marek Číhal transferred to the place by the perforation technique. When you get enough of the light effects enlivening the underpass, go back to the daylight and head along Vítkovická Street to the unique church of St. Josef Don Bosco (this was the first church with a steel structure in the former Czechoslovakia). The graffiti on the facade of the adjoining building of the Salesian Centre was created by Nikola "KHOMA" Vavrous, who is "responsible" for a number of realizations in Ostrava. You can also find one of his large murals in the local zoo.

The next stop of the route - the underpass under the tram line and Místecká Street - can be reached after a 500 m walk along Vítkovická and Železárenská streets. The walls of the underground access to the former Hlubina Mine are decorated with dozens of different graffiti, including depictions of fantastic creatures by the artist Petra "Sasanca" Gherbetz. In the area of the Hlubina Mine, perhaps the biggest attention will be drawn to the large mural on the building opposite the branch of the National Agricultural Museum. This mural was created in 2016 for the Melting Pot conference by the Brooklyn street artist Gaia.

In Dolní Vítkovice itself, more examples of street art can be found, but the walking route ends with another large-format, this time abstract, mural, which enlivened the building of the VP1 hotel next to the Bolt Tower. The author of this nameless work is the Czech artist Jan Kaláb.

Difficulty: An easy route on the sidewalks is also suitable for prams and wheelchairs with assistance.

Accessibility by public transport: Between the starting point of the route and the destination you can move by tram (lines 4 and 12 from the Výstaviště stop with a change to lines 1 or 2 at the Karolina stop, get off at the Dolní Vítkovice Hlubina or Dolní Vítkovice stop, in rush hour on weekdays you can use a direct connection in the form of line 10) 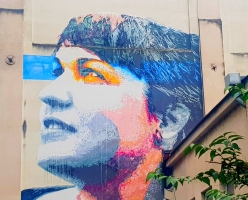 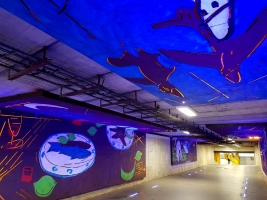 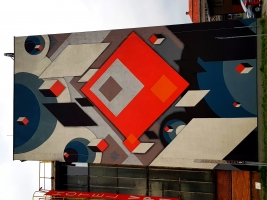 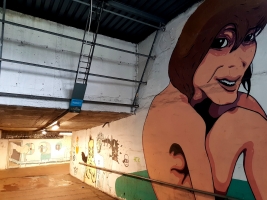