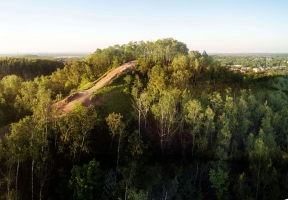 To the zoo across the Ema heap

Have you ever been to a smoldering volcano? The Ema heap, although definitely not of volcanic origin, will allow you to experience it - it has been burning inside for several decades and small clouds of steam rise here and there from the inside to its surface. Head to the top from another Ostrava landmark - the New City Hall and then end the walk with a visit to the zoo, which is one of the largest (and according to many also one of the most beautiful) in the country.

Start the walking route at the Ostrava New City Hall, from where head upstream the Ostravice River to the green footbridge at the Regional Court. Cross the river and continue along the Silesian bank to the steel M. Sýkora Bridge. Cross Bohumínská Street and pass by the Monument of liberation in the form of a tank to the building of the Silesian-Ostrava City Hall. From the town hall, follow the yellow sign along Keltičkova Street, which is named after the blacksmith who, according to legend, was the first to discover coal in Ostrava. A small private museum, "Keltičkova kovárna" (the Keltička's Forge), is dedicated to his memory.

At the last of the modern terraced houses, turn right and continue straight along Na Františkově Street, cross Na Baranovci Street and after the terraced garages, turn right into Pod Výtahem Street (named after the freight cable car that once led here). In the bank on the left you may notice the concrete "einmann bunker", which served during the World War II as an observatory.

There is a beautiful view of the mining tower and the area of the former Petr Bezruč Mine (Terezie) from the bend of Pod Výtahem Street, which descends and flows smoothly into Na Burni Street. At the sign of the nature trail, connect again to the yellow tourist sign and continue along Vlčkova Street (rather than the street it is a forest trail) to the first crossroads, turn left and continue up to the next crossroads with the information board.

From the crossroads, follow the well-trodden path in a sparse forest and start the top ascent to the Ema heap. The reward for a little effort will be an unbeatable view of Ostrava and the surrounding area. Just below the top, you will find a dispersive basket made of stones, which is used to disperse the gases generated inside the heap. Here you can also see in several places that the surface of the heap is really hot.

Enjoy the view and then walk down along the yellow tourist sign on the wooded side of the heap, turn left at the crossroads below the hill and turn right at the next crossroads of hiking trails in the direction of the zoo. Follow the local signs and after about 500 meters you will reach the entrance to the Zoological Garden and Botanical Park Ostrava.

Difficulty: The shorter route with a relatively steep ascent to the Ema heap is not suitable for cyclists or prams. After the rain, some sections may be less passable.

Parking:  Paid underground car park under Prokešovo Square or at the Ostrava Zoo (if you choose the opposite direction of the walk) 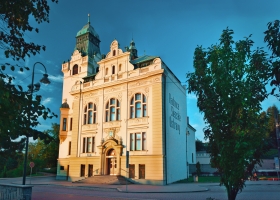 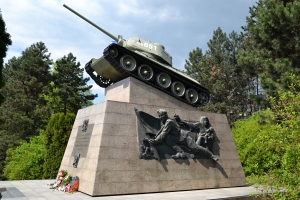 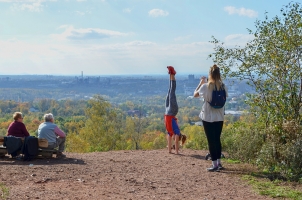 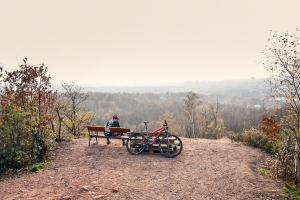 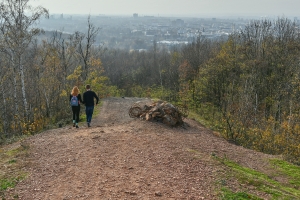 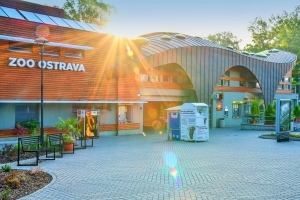